Welcome to the Boomer's Wake!

A baby boomer is defined by Wikipedia as person who was born during the post World War 2 baby boom between 1946 and 1964, and are currently in their 50's and 60's.

Being the largest population group in the United States, the boomers play a major role in setting the political agenda, driving the economy and using up the planet's resources.

Why do we pay attention to demographics?

Studying demographics helps tell the future, because there are pretty consistent trends that occur when a person moves through various age groups. In a very simple analysis of typical trends and consumption at various ages, we see the following:

Given the predictability of behavior of people in a particular age group, look at how easy it is to explain our recent history and give us a crystal ball into the future.

By the end of the '50s, the boomers became teenagers. This explains the massive explosion of music, movies, diners. i.e. Happy Days and hula-hoops.

In the '60s and '70s, the boomers were in their 20's and were very socially active, fighting against the war and going to Woodstock.

In the '80s, the boomers were hitting their prime and the economy started to roar. Real estate and the auto industry thrived as the suburbs exploded.

In the '90s, the boomers were peaking financially and the stock market started to peak as well.

And now that the boomers are starting to retire in this decade, converting themselves from earners and consumers to retirees, it is not a coincidence that the stock market and economy has stalled considerably. Those who study demographics know it happened right on schedule, starting in 2007 when the first baby boomers hit retirement age.

So if economic activity booms when the majority is in their 30's and 40's, but slows when they reach their 60's and 70's, it would seem that we are now facing an insurmountable economic slowdown for years to come. And if you throw in the financial ramifications of funding medicare and social security in the next decade, we are facing an enormous economic burden. But don't worry...

The good news from an economic perspective is that the baby boomers had kids in large numbers. Their kids are known as echo boomers, or Gen Y. This is an almost equally large population of people born in the 80's and 90's. Echo boomers are between 15 and 28 years old right now and given the predictable trends we mentioned earlier, they are just getting through college and starting their careers. So when they reach their 30's and 40's, they will become truly significant earners and tax payers, but unfortunately, this will not occur for about 10 years.

Welcome to the Boomer's Wake! 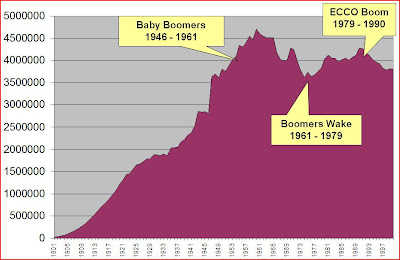 Looking at the demographics chart above showing birth rates for the past 80 years, you can clearly see the baby boomer wave and the echo boomer wave. Most importantly for those of us in our 30's and 40's, you can also see the huge gap on the chart between the two demographic waves. That gap is us! The people currently in our 30's and 40's. We are the smallest generation of the three, but are becoming the primary earners and tax payers for the next decade.

We are the ones that are now being asked to pay for the retirement benefits that the boomers promised themselves, deal with the US debt and deficits created by politicians who also happen to be boomers and take responsibility for repairing the planet after decades of reckless resource depletion and pollution by the same group.

Like a cruise ship cutting through the water and leaving a turbulent wake behind, this baby boomer generation cruised through the '80's, '90s and 2000s and have left a huge wake behind them for us to try to navigate through.

Welcome to the Boomer's Wake!
Posted by Greg Ausley at Thursday, November 06, 2008

congrats on the new blog. i am excited about this. =)

Good stuff! Puts it all in perspective. I hadn't thought about the bigger picture of how generation-spending matches our overall economy. Make sense. While it's totally overwhelming to think about....but thanks for not making it not sound completely hopeless. :) So, the question is what crazy thing is this next 'wave' going to come up with? Where are they going to make their 'big bucks'? And, how do those of use in the 'wake' prepare for the next wave. hmmmm....

Good information. Can you tell me where I could access the numbers from which the graph is plotted? I would like to enter them into a spread sheet.

The following statement is in the above: "So if economic activity booms when the majority is in their 30's and 40's, but slows when they reach their 60's and 70's, it would seem that we are now facing an insurmountable economic slowdown for years to come."
I find this very simplistic and misleading. In fact, the Boomers are much, much more wealthy that there parents were, in general. They are better educated. They have the advantage of 401(k)-type savings, as opposed to pensions, many of which have failed and/or dropped health care coverage. They will have Social Security and Medicare. They will spend money differently than when they were in their 30's and 40's, but they will spend as much or MORE! The concept of seniors shutting down in spending is a farce. For those who are house rich and cash poor, a reverse mortgage yields spending money. Again, I find the above statement full of holes and unsubstanciated.

George. Although it is definitely a generality, there is some legitimacy to it. Think about the spending patterns of people in their 30s and 40s vs. 60s and 70s. For me it is as easy as watching my parents vs. my peers. Consume vs. Preserve. It isn't 100% to 0% but there is a definite change in behavior. The good news is that the boomers' kids will be in their 30s starting around 2018, which is when I predict we start to grow out of the mess we are in now. I predict anemic growth, flat markets and mini-crashes will be the norm for the next 6 years or so.

Greg Ausley
Former owner of a internet software company automating the Commercial Real Estate Industry. Sold company in 2008 to a publicly traded company. Active stock market trader and student of demographics and market trends for a decade. Founder of LifeSpace.com and LifeSpace Community in 2009.